Can we rely on the good news from the latest Giving USA 2020 Annual Report? It was just released in June, and the data shows several positive trends in the fundraising world, albeit pre-COVID. This report, released annually by The Giving Institute, analyzes national-level giving data and provides econometric-based estimates from leading industry experts. Keep reading to learn about the biggest news from this year's findings and learn unique insights into the future of giving in the nonprofit sector to help plan your nonprofit's best fundraising strategy. 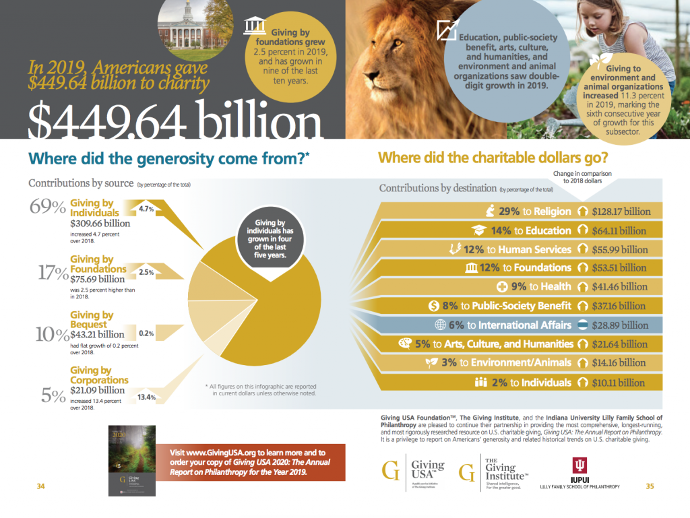 Last year, charitable giving continued to trend upwards in the United States with an increase by 4.2%, or 2.4% adjusted for inflation, and a total of $449.64 billion donated to nonprofits in 2019. This is the second highest level of charitable donations, and the largest dollar amount of donations on record in a single year.  The education, public-society benefit, arts and culture, environment and animal organization subsectors all had double digit growth in 2019. The only subsector that saw a decrease in giving during from 2018-2019 were international affairs-based organizations. It is also notable that 2% of charitable dollars last year went to individuals. Although this is a small piece of the pie overall, this trend indicates the growing efficacy of social media, crowd-funding, and other non traditional fundraising efforts.

2. Giving by individuals continues to grow each year


Giving by individuals has grown in 4 out of the last 5 years, and now represents 69% of total charitable giving for 2019. The increase of individual giving is notable because the Tax Cuts and Jobs Act (TCJA) that went into effect in January 2018 decreased the standard deduction, which lessened the incentive for individuals to itemize charitable donations on their taxes.
The ability to decrease tax liability with donations is a strong incentive for many individuals to give, and the amount of individual giving decreased for a year after this law went into effect.  This new law, however, does not appear to have a lasting negative impact on individual giving and the upward trend of giving levels bounced back in 2019. Although the pandemic has affected the finances of many individuals this year, the Corona Virus Relief law that went into effect in March of this year includes a charitable contribution deduction of up to $300 that can be claimed by those who choose not to itemize deductions. This stipulation may help encourage individuals to continue to donate through these uncertain times.

3. Giving by bequest comprises 10% of all gifts made

Although the rate of gifts by bequest increased at a flat rate of 0.2% this year, it is notable that the rate of bequeathed giving has increased 9.8% overall since 2017.  Prioritizing planned giving at your organization--donors typically triple the donations they made during their lifetimes with bequeathed gifts. It is also never too early to reach out to your contacts about planned giving--the average donor is only 44 years old when they draft a will, and 53% of donors include a planned gift when they draft their first will according to a special report from Giving USA.

4. A surge in corporate giving


Corporate giving increased by 13.4% in 2019, and on average represents 1% as a percentage of pre-tax profits, the highest rate since 2003.  COVID-19 may have several effects on this trend. Corporations that will have decreased revenues this year may decrease their charitable gifts for 2020, and businesses may engage in reactive giving and divert donations to nonprofits that support COVID-19 relief.  Foundation donations only improved slightly this year with an increase of 2.5% this year (and a flat rate the year before),but we should not forget their importance. Foundations currently provide 17% of all charitable donations and nonprofits supported by foundations have faced less budgetary issues than those who rely on other funding sources.