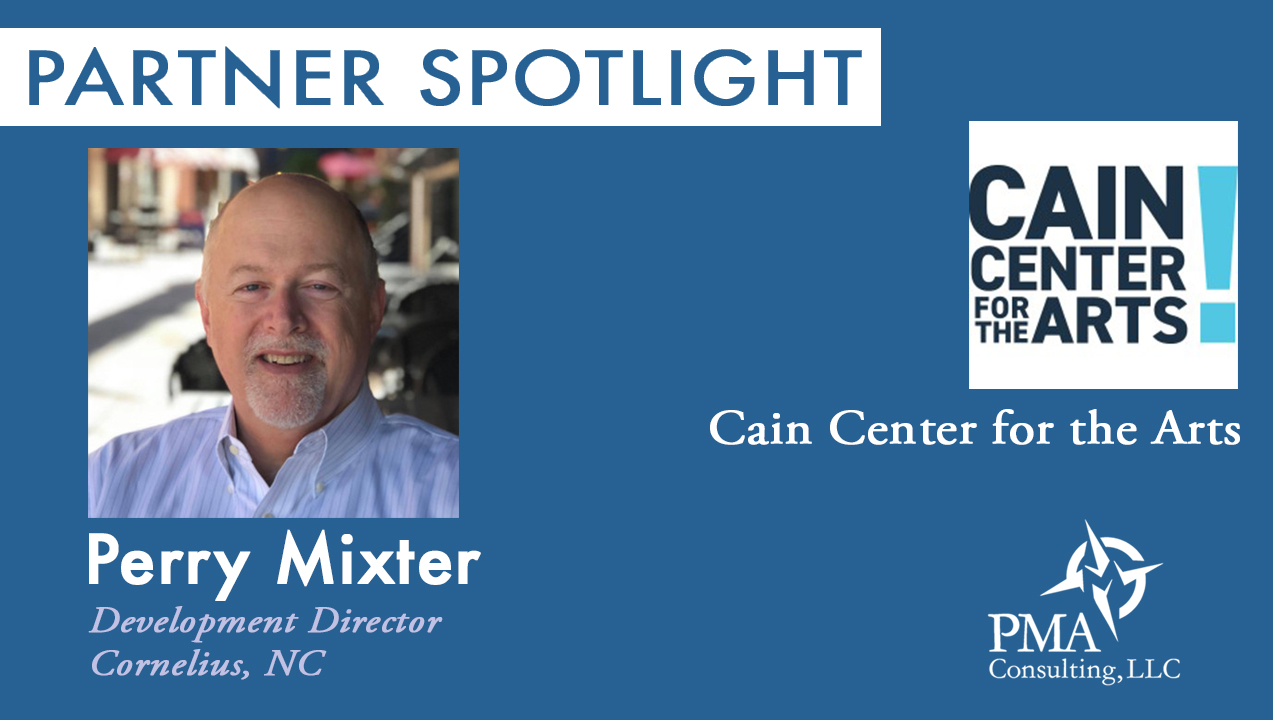 PMA's Charmain Lewis had the opportunity to speak with the new Development Director at the Cain Center for the Arts, Perry Mixter.  Mixter has followed his passion for the arts from an early age, and his journey has brought him to the Cain Center at an exciting time in its development, and allows him to partner with the Center's Executive Director Justin Dionne. With an extensive background in nonprofit management in the arts and culture sector, Mixter is excited about the Cain Center's vision to empower children and adults to create, experience, and enjoy the arts.

Tell me about your role at Cain Center and describe the journey that led to this position.

In April, I was appointed to serve as the Development Director for the Cain Center for the Arts in Cornelius.  I developed an interest in the arts through my family while growing up in Cincinnati, Ohio.  My father worked for Baldwin Piano & Organ Company and during my collegiate years at Denison University, I spent time working at the Tanglewood Music Festival in the Western Massachusetts. While there I enjoyed playing a behind-the-scenes role in the presenting of the Boston Symphony and dozens of other artists each summer.

With this experience and a few additional years working at Yale and in Ann Arbor, I went on to obtain my graduate degree in Arts Management from the University of Wisconsin, Madison in 1985, and was immediately hired as the Executive Director of the Winston-Salem Symphony.  After spending seven years with the symphony, I was then recruited to serve as the Director of Cultural Affairs at Appalachian State University.  I went from being a Symphony manager to managing a multidisciplinary, visual and performing arts portfolio, which was quite intimidating!  But working as a presenter in the field of higher education was a great experience we were able to bring artists and programs to town that enriched campus and community life.  I spent 17 years with ASU and my wife Jan and I raised our family there.  In 2007 I went on to become the COO of The Arts Partnership of Greater Spartanburg in South Carolina where I helped open the newly constructed Chapter Cultural Center, which was the centerpiece of a downtown economic development plan.  In 2011, as a consultant, I began working on a number of projects with the Arts and Science Council in Charlotte which eventually evolved into a full-time position as Vice President for Development.  During this time, I oversaw all the workplace giving campaigns and all fundraising activities for ASC. During this past awful pandemic year, I was semi-retired and about to fully retire when the Cain Center opportunity presented itself.  I feel so lucky to have this new opportunity to work for an organization that is so clearly filling a regional need for a cultural and community center.

What sparked your interest in nonprofit work?

What has motivated me throughout the years is seeing the magic that happens when an artist interacts with an audience member, seeing the light bulb turn on, and seeing a kid's eyes.  I recall the time when we had the Celtic family group, Leahy, perform at Appalachian State. They had performed a few times prior.  At the end of this performance, they came out to the lobby to sign CDs.  I saw a young girl standing in line, holding a violin, and I asked her if she enjoyed the show.  She said she loved it and had seen them when they performed three years prior.  That's when she decided to learn how to play the violin. These are the stories that remind us of what nonprofit work is all about.  It's not about nonprofit management, it's about changing people's lives.

What is the Cain Center's vision and how do your objectives as a leader align with the vision?

The Cain Center's Vision Statement is as follows: "We want to empower children and adults alike to create, experience, and enjoy the arts, right here in the heart of the region where they live, work, and play."  Those words resonate with me because it's not just a place for artists, but it's a place for the community to come together. It's a common area, a common meeting place that hasn't existed before.  I think it has a huge amount of potential for the town of Cornelius and the Lake Norman region, not to mention economic development.  It will be a facility that can handle all sorts of different programs and activities. Other community organizations can use it, such as the Symphony, so it just opens a whole new level of interaction with the community that they haven't had before.

What has helped you on your path to nonprofit leadership?

I can't emphasize enough the importance of networking. It's important to keep the dialogue going about what's happening in the community. It's about who you know and how they can help you achieve your goals.

Describe your experience working with PMA?

Patton and I have been colleagues for a long time and have kept in touch over the years.  PMA was intricately involved in helping establish where the Cain Center is today.  I think their consultation with the Board has been extremely effective.  We recently held a campaign meeting where we're now asking, "What are we going to do when we hit the twenty-five million mark?"  During the meeting someone recalled a point in time when they were asking if the Cain Center could raise five million.  Now they're discussing how they're going to celebrate twenty-five million!  We've come a long way.

What do you like to do when you're not busy at the Cain Center?

I'm heavily involved in the choral scene here in Charlotte. I sing in a group called VOX as well as the Caritas A capella Ensemble.  They are small ensembles of 20 to 30 people. It's great fun and artistically satisfying to be a part of these kinds of smaller ensembles. I'm also singing with the Holiday Singers, a for-hire group that sings for holiday events around the region.

How do you define success?

My definition of success is when your personal goals are closely aligned with the goals of the organization, and that you know with certainty that you are making a difference for the organization and the community it serves.